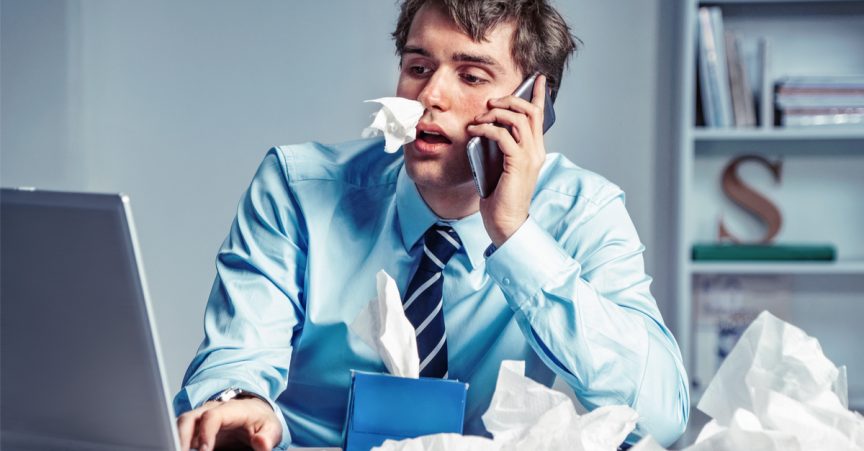 Next to death and taxes, nothing is more certain than the spread of cold and flu in American workplaces.  Guilt at leaving workloads with co-workers and fear of job loss, keep many sneezing and coughing people at their desks.  Lasting from days to weeks, airborne and surface-spread illnesses sweep through companies like wildfire, infecting immune-vulnerable, stressed, and over-worked employees.  For small businesses, multiple people off at once, slipping project deadlines, and the paperwork associated with tracking unpaid and paid time off (PTO), is a productivity apocalypse.  In 2018, the National Institute for Occupational Safety and Health (NIOSH) cited estimated costs of $7 billion for 17 million missed workdays and lost productivity.  It’s no wonder supervisors can feel less than empathetic when for sick leave requests roll in!

How can managers humanize their responses to leave requests while supporting a healthy workforce?

The tiny minority of sick-time abusers who call in on Friday, Monday, and around holidays, or post beach photos on social media after calling in with “food poisoning,”

the over-achievers who seldom miss work and rarely use all their allotted vacation time.  These may even be the germ-spreaders, as a Tsheet survey of 1,067 employees showed that 61% didn’t use all of their PTO!

Let’s deal with the Fair-Weather Sickies first:  Start by tracking dates and details of excessive absences.  Next, have a friendly chat to find out if there is a real, ongoing issue that might be covered under the ADA that is requiring frequent absences.  If so, encourage them to let HR know.  If not, remind them that abusing the sick leave policy affects other employees, puts them in danger of a written reprimand, and, in at-will employment states, could result in termination.  Finally, require telephoned absence requests, not emails or texts.  Often, having to ask for leave in-person will fix the problem.

The Over-Achiever needs empathy, not apathy, like these boss horror stories.  Work-shaming an already anxious employee will not get them back on the job quicker.  Fielding calls at home and fretting about work piling in the office, raises cortisol levels.  Studies show that enhanced cortisol levels increase inflammation and stress sensitivity, reducing the immune response.  Bosses that “punish” employees for taking sick leave, may end up with entire departments being infected, not to mention lowered morale and job satisfaction.  Don’t make your top achievers feel guilty about taking time off; let them know that workers are humans and humans do get sick!

For both groups, be sure there is a well-written, sick leave policy that complies with federal, state, and local laws.  It’s good to check current laws; for example, did you know that Emeryville, CA allows paid “pawternity” leave for service animals?  Eleven states, including MA, NJ, CT, and RI, now require employers to offer paid sick leave.  The FMLA does not, but it does require unpaid leave for specific reasons, such as care for a spouse or child with a serious health condition.  Employers may also be eligible for tax credits for providing paid family leave under the new tax reform bill.  So, review your legal obligations and be sure that your policy clearly describes regulations in addition to well-defined sick leave policy.  Include definitions for paid and unpaid leave, when, how, and to whom employees should give notice, and whether they need a doctor’s note for longer absences.

A More Progressive Approach to Time Off

Finally, consider the advantages that over 63% of companies have discovered by switching to a PTO bank.  Employees are given a set number of paid days off, preferably metered over four quarters, to spend as they wish.  Small businesses typically start new employees with 15 days PTO.   This winning approach means a mental health day does not require lying to the boss, and vacation time can fill in for an extended illness.  For some companies, PTO banks can be easy to administer, but be aware that states like New York may require tracking of types of leave as part of compensation reporting.

Of all the perks that a company can offer, what can be better than having a guilt-free wellness day off?

For More Information on PTO Banks:

Institute for Women’s Policy Research –  Paid Time Off:  The Elements and Prevalence of Consolidated Leave Plans